The organ is my orchestra & the orchestra is my organ

From the art of organ transcription: transcribing-playing-orchestrating/registrating.

Hansjörg Albrecht provides insights into a universe from different perspectives. Entirely in the spirit of the master of arrangement Leopold Stokowski (1882-1977), Anglo-American conductor, concert organist, arranger and sound magician on the 45th anniversary of his death. Works from the baroque to the classical modern (Händel, Wagner, Bruckner, Rachmaninoff, Mussorgsky and others) will be arranged. 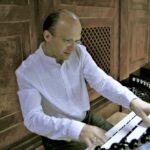